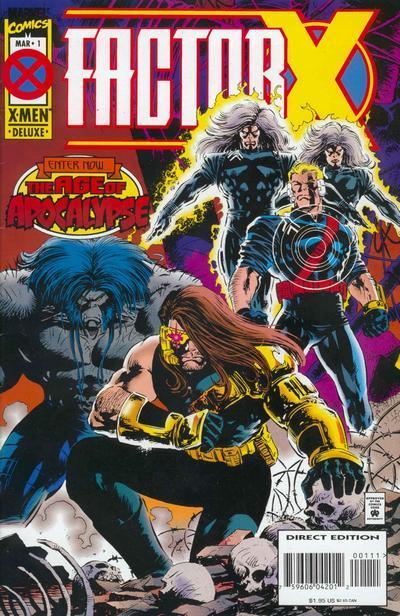 Since I was in the Ortigas area yesterday, I decided to stop by SM Megamall to check out the comic and toy shops there. There are 2 comic shops at the basement of building A,  and one of those is Filbar's. I love Filbar's because some branches have bargain bins of comics ranging from 20-90 pesos. Some of the issues go as far back as the early 90's and as recent as 2007/2008.

I was browsing through the bins when I found Factor X #1, from the Age Of Apocalypse series in the 90's. I'm not sure, but I may have picked up this title back when it first came out, along with some other titles from the AoA series. I've already lost/ misplaced all of those in the last 10 years.
I've recently added some of the AoA titles to my "hunt list", and I'm just looking for some issues to complete them. This Factor X #1 is the first one I have in my possession of this title, and I got it for only Php 20.00. Sweet!
I haven't taken it out of the bag yet, but it seems like it's in fairly good condition.
So that's one down and 3 more to go for this title. I wonder if i'll find the other issues at the Metro Comic Con.
Posted by Ryan at 10:00 AM