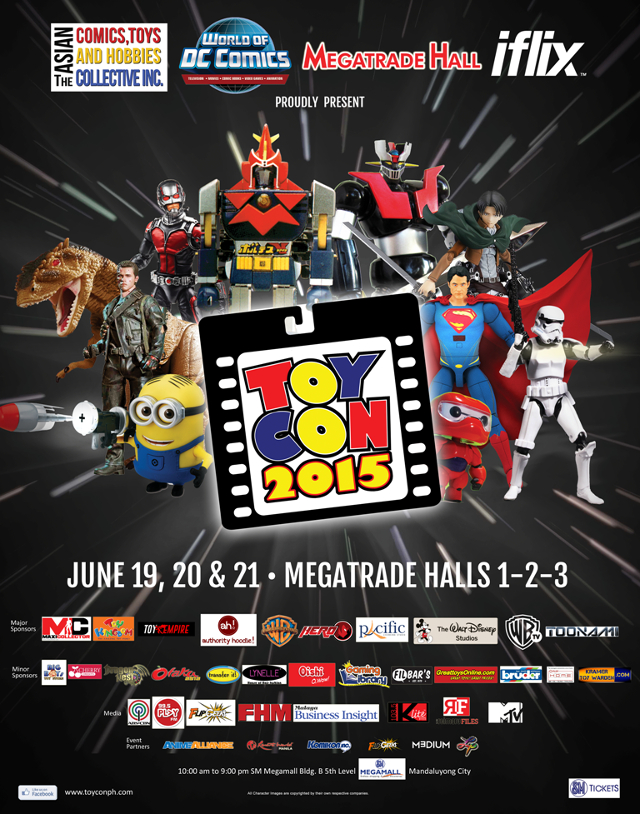 The Philippine TOYCON, Asia’s biggest and longest running convention for toys, anime, comics, cosplay, gaming and anything and everything related to hobbies and collections is now on its 14th year of thrilling fans and aficionados alike. It is, simply put, the biggest pop culture event in the country.

This year’s TOYCON highlights the World of DC Comics with its colorful characters upholding justice with a grand exhibit from Pacific Licensing. Also get a chance to own cool licensed DC Hoodies from the Authority Hoodie. Southeast Asia’s leading Internet TV service launches in the Philippines, as IFLIX explodes into the pop-culture landscape of the country during the Philippine ToyCon, with unlimited access to its line-up of the most awesome and iconic movies and TV series. With trial memberships now open, everyone is free to explore and enjoy the vast range of content on iflix.com.

Walt Disney Pictures brings in the wonder of Star Wars with its new line of merchandise from the original film saga and the new Star Wars Rebels series. And also, get into the world of the smallest superhero with Marvel’s Antman interactive exhibit. Also catch future and fantasy fever as Universal Pictures’ Terminator: Genisys and Jurassic World launches in ToyCon with an eye-popping display of the movie’s cinematic artwork and line of collectors’ toys. Other movie highlights are the upcoming live-action Attack on Titan from Pioneer Films and Doraemon: Stand By Me the Movie in 3D. Catch Doraemon and friends live at the ToyCon stage!

The TOYCON also features the biggest in Cosplay with the TOYCON’s own Cosplay Universe, unleashing a barrage of individual and group cosplayers led by Asia’s Cosplay queen, Alodia Gosiengfiao. Also catch the Star Wars 501st Philippine Outpost parade its new troopers and droids from a galaxy far, far away.

Revel in opening night festivities with a series of ToyCon Pop Quiz competitions and get your fill of local and foreign comic book artists in the Artist Alley set up by Flipgeeks and Komikon.

TOYCON would not be complete without the biggest dealer floor of all pop culture merchandise in terms of apparel, collectibles and memorabilia, graphic novels and comics, cosplay paraphernalia, and toys, toys, TOYS! So let loose the child in you once again by getting ready for war in new battlefields of play!

The Philippine TOYCON 2015 will be held on June 19-21, 2015 at the SM Megatrade Halls 1, 2 and 3, SM Megamall, Mandaluyong City. Tickets are now on sale at SM Tickets (www.smtickets.com) til June 18. Tickets are also available at the event gate on June 19-21. For more information on schedule of activities and event details please visit: www.toyconph.com www.facebook.com/toyconph
Posted by Ryan at 2:04 PM Links to this post