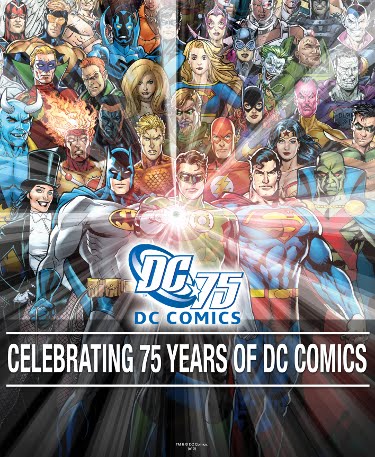 This 2010, DC Comics  commemorates 75 years of world-renowned comic book characters and their adventures with consumer events and new film, television and DVD content releasing throughout the year.

This world-wide celebration of such a momentous event is so fitting for a giant like DC. Through out the years,  DC Comics characters have inspired blockbuster movies, classic television shows, engaging video games, exciting theme park attractions, and an array of consumer products for fans of all ages, worldwide. These are the characters that have shaped our notion of heroes, and created a modern mythology for every generation, across all media.

As part of its 75th year celebration, DC Comics invites everyone to join the DC Comics 75th Year Power Up! Super Heroes Challenge this June 19 and 20 at the SM Mega Mall Events Center. The activity camp will feature extreme outdoor activities, which will be set up indoors for the first time in its scale. This Father’s Day weekend, kids and parents alike can bring out the superhero in themselves through activities such as the Tyrolean Traverse, Two-Line Tight Rope, and the Zip Line.

The camp site will also feature a DC Comics Mini Museum where limited edition and toy collections from DC Comics, Toy Kingdom, collectors and fans will be on display. Everyone can expect an array of Batman, Superman, and Justice League toys and figurines.

To register, simply buy PhP500 worth of DC Comics products from the SM Department Store Character Shop and Boys Teens Wear departments between May 22 to June 20, 2010 to get a free DC Comics 75th Year bag tag. Use this as your event pass on June 19 and 20, to register at the DC Comics 75th Year Power Up! Super Heroes Challenge in the SM Megamall Building A Events Center. One bag tag entitles one participant to go through the course once.

You may also present any Batman or Superman personal care product by Master Kids at the registration booth to claim one bag tag to use as an entry pass to the DC Comics 75th Year Power Up! Super Heroes Challenge.

DC Comics 75th Anniversary will be the main theme of this year’s Toy Convention to be held on June 19 and 20 at the SM Mega Trade Halls 2 and 3. This year’s Toy Convention will include DC Comics- themed competitions and activities. Everyone is invited to come in a superhero or comic book character costume as Collectors Unlimited will attempt to gather the most number of people in superhero costumes in one location.

Come and join the celebration!

DC Comics is best known as the home of the world’s most famous super hero characters: Batman, Superman, Wonder Woman, Green Lantern.
Posted by Ryan at 2:18 AM Links to this post

New Pulls From The 20 Pesos Bin

I was at Market Market last Saturday killing time so I decided to check out one of my favorite comic book stores, Comics N' Stuff. Comic's N' Stuff is a sister store of Comic Odyssey, another favorite store of mine. I love this place because their 20 peso bins are back issue gold mines! 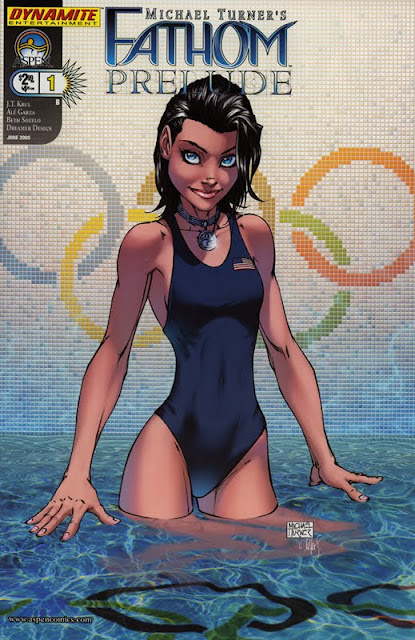 While browsing through the bins, I saw quite a few issues that I almost picked up, but then decided to drop after giving it some thought. There was a Wildcats Vol.1 #4, which I already had in my collection so I don't know why I even thought of buying one. Plus a couple of superman titles, X-man issues- whose covers were painted and looked amazing-- and a few others I can't remember now. After going through all the bins I had 10 comics in hand, but chose to buy only 2. I picked up a Fathom Prelude #1 with a Michael Turner cover and a Red Sonja #0. 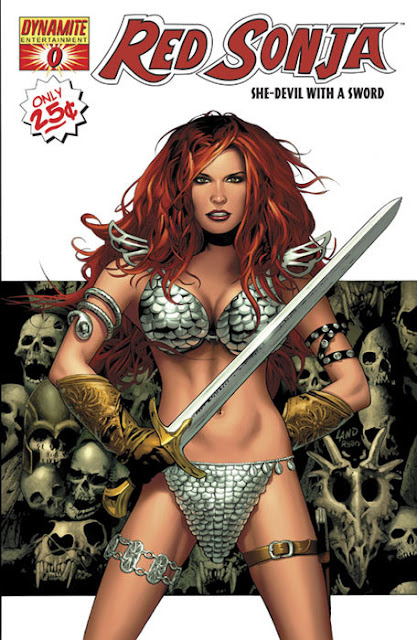 Fathom Prelude #1 is set back in the 80's and tells the story of a young Aspen Matthews as she competes in the Olympics as part of the US women's swim team. An incident at the the games marks the end of her swimming career, but paves the way for her love of the deep ocean.

And that's my weekend pull.
Posted by Ryan at 10:31 AM Links to this post

I Fondled An Ipad

Yes, yes I did. And it felt goooooood!

I went to Mike's studio the other day to join some friends for a day of shooting portraits when I saw an Ipad lying near his computer. I remember Mike saying he was expecting one to arrive around late April. Everyone was excited to get their hands on it, but of course I was the first one to.

I actually dismissed the Ipad as another consumer product of Apple that  has no use for me, but then they teamed up with Marvel Comics. I salivated like crazy.

So yeah, to make the long story short, I fondled and pawed it, and now I am in love.

My preciouuuuuusssssssssssss.
Posted by Ryan at 5:30 PM Links to this post

Mark your calendars! This coming weekend, Comic Odyssey and Planet X Comics are holding a 3- day sale.  At Comic Odyssey, get back issues for PHP 50.00, and get 20-50% off on graphic novels. Get great discounts on manga, comic book sets, and action figures as well.

From Planet X Comics in Glorietta:

So come armed with your lists and loaded wallets. See you at the 3-Day sale!

May 22 is FREE COMIC BOOK DAY at Fully Booked! 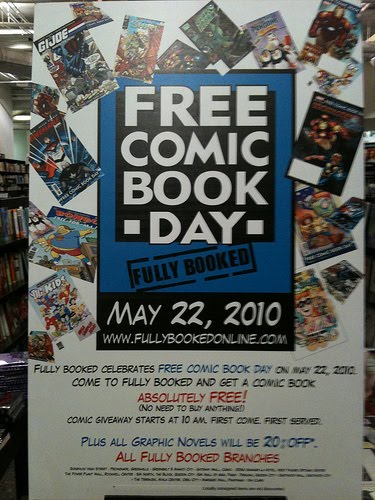 Comic give-aways begin at 10 A.M., on a first-come, first-served basis.

Thanks to Kate and Dante for the heads-up!

Photo from wardonthenet.com.
Posted by Ryan at 6:00 AM Links to this post


Initially, I intended to cover every comic book store that participated May 1st's Free Comic Book Day. But my plans changed so I limited myself to Comic Odyssey in Ortigas. Hello, Iron Man 2!

My friend and I went to Makati after the FCBD at Comic Odyssey, so we took a side trip to Planet X in Glorietta to see how their celebration was. We got there around 6 PM, at which time there were no longer free comics and no line of comic book fans waiting to get in the store. There were just a few people looking through the back issue bins, which were on sale at PHP 50.00 each. I wasted no time in going through them myself and picked up these 5 issues of Black Widow: Black Widow Deadly Origin 2 & 4, and Black Widow The Things They Say About Her 2, 3, and 6.

After chit-chatting for a bit with the store peeps as I paid for my purchases, my friend and I went on our way. Mcdonalds beckoned.
Posted by Ryan at 6:14 AM Links to this post


Free Comic Book Day at Comic Odyssey was a success! I arrived at around 10 A.M, just as Robinson's Galleria opened, and when I got upstairs there was already a line that reached Saizen.

I was hoping to get first in line to get the free comics, but surprise-surprise, every other comic fan had the same idea.


Comic Odyssey gave out three free comics for each person, as well as other free stuff like book marks and lollipops as well as, I believe, a goody bag of comics for a certain number of people. There was a raffle draw held every thirty minutes since they started where they gave out fantastic prizes.


The store was packed inside. Comic book fans took advantage of the PHP 50.00 back issue sale, myself included, so it was a very tight squeeze.


Also at the FCBD were Pinoy comic book artists Leinil Francis Yu and Gerry Alanguilan, who signed copies of their new collaboration Ultimate Avengers 2 #1. Ed Tadeo was also there as well as a surprise appearance from Jay Anacleto, who I had been hoping to meet so I could have my Aria comics signed. Too bad I missed him.


So what free comics did I get? I got the Iron Man and Thor comic book; Artifacts from Image Top Cow and Dark Horse's Doctor Solar and Magnus.


I also got this:


Just like last year, I had such a great time at this Comic Odyssey's FCBD. What made it more enjoyable was meeting fellow collectors from Comic Kolektor Phillipines, who were there not only to get free comics and buy back issues, but to reach out and promote the forums to others.


Thanks to Sandy and the Comic Odyssey crew for such a wonderful event. Till next year's Free Comic Book Day at Comic Odyssey!

More photos here.
Posted by Ryan at 6:10 PM Links to this post

My UP SUMMER KOMIKON 2010 Loot


Now that I've shared my experience at this year's UP Summer Komikon, Let me now share with you my loot! Let me start with the local comics. I got myself Gerry Alanguilan's Elmer #3; Jay David's Kubori Kikiam Komikon exclusive, where it was Kikiams against Man vs. Wild host Bear Grylls; and Taga-ilog's Pasig. All signed by their respective artists, of course!

From the indie Tiangge I got Lucia, whose cover art I just love; and Juan Masipag/Juan Tamad.I was hoping to get Aswang Files #2, but I wasn't able to because the seller was late. Maybe at the next con. I also picked up an issue of Mangaholix.

What's so great is that for every 5 comics I bought, I got another one for free! From another booth, I got WonderWoman 223- because I thought it was a tie-in with Amazon's Attack. Turns out it wasn't; and X-men First Class 6. Bothe were PHP 50.00 each.


Some of these titles are already on my list like House of M, Tomb of Dracula and Aria to name a few; some are new titles I picked up like Black Widow Deadly Origin and the Superman/WonderWoman book. Getting these issues brought me closer to completing some titles, making my list shorter, yet at the same time longer because of the new titles I picked up. I guess it never ends.
Posted by Ryan at 5:05 PM Links to this post